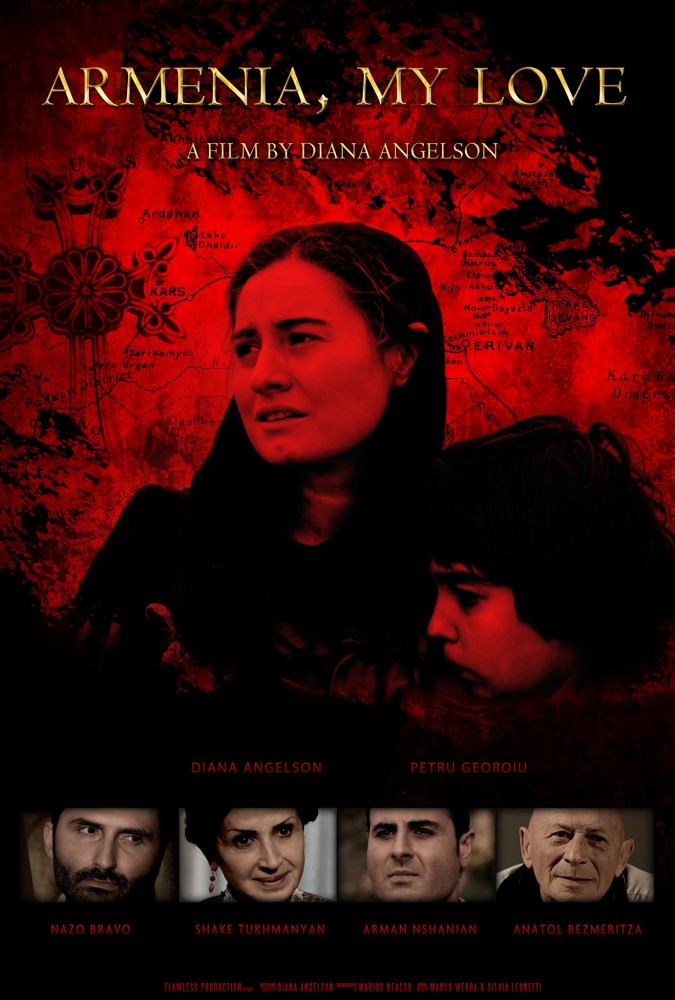 Interview with Diana Angelson, director of ”Armenia, My Love”

1.What inspired you to make this film?

Injustice is what drives me to write scripts. The need for people to know and understand past mistakes. I believe Christianity is Love, in the purest of forms and many peoples have exploited it, more so – attacked its essence, that of ” turn your other cheek”. A religion of conquering like Islam, definitely had more power over the Christian minorities of the past thousand years and one example is what happened in 1915, when 1.5 million Christians Armenians were marched to their deaths in the hot Syrian dessert. It is interesting how thousands of other Christians are marched to their deaths in the same islamic territories, by forces and beliefs that are so far from “Love One Another” and from what Jesus taught us.

A few years before I wrote ‘Road of Love’, about the Holocaust and how Romanian Christians helped save 400,000 Jewish people from Auschwitz, fact that is not known in the world.

2. What messages would you like the audience to take from the film? Regarding the past? Regarding now and the future?

One message is “Look how an entire world can be mislead into thinking  for 100 years that a Genocide did not happen”. Turkey is still denying it. New generations of young people need to learn about the past, otherwise, another hundred years from now and the youth will think Armenia is some country of the past, Christians were never ostracized and Easter is just about chocolate eggs. This is the reason the film starts with the Easter celebration in 1915- to mark the profound understanding of the Miracle of Christ’s Resurrection, followed by that infamous day, April 23rd, 1915, when all the Armenian community leaders were called in Constantinople, (city founded by Constantin the Great, now capital of the Ottoman Islamic Empire)- and beheaded, for being Christians. Whoever would convert, would escape. But the Armenians, minority on their own homeland, would not, did not give up Christ. Their seeds were not buried, but instead, a 100 years later, they grew stronger than ever.

3. How did you prepare for your role in the film?

I am playing a pregnant mother. To be honest, I had so many other things to do, organizing, directing and producing, that the part was kind enough to just come to me. I felt very much I was Hasmik and I “lived” her life as it was mine, for that entire month we shot the movie.

4. What was most difficult scene to shoot?

There were a few. There is a rape scene. A lot of people don’t know, but women were raped , then crucified, naked, just like they did to Christ. We have that scene , but it was too horrible and I had to take it out or we would have all died in the theatre.

Then the marching of children, women and old people. It was a hot day in the desert and my actors and a few Armenian volunteers didn’t have the water with them, nor food, hats, sunscreen. And we walked for a few miles, to find the perfect shot. We got to a point where we were all burnt, dehydrated, dizzy. And I said: ‘Think how your great-grandparents had to walk like this for days, with little crying children. We have the luxury to go back to our air-conditioned cars and easy life in a few hours, but them? We have to do it, to honor them. We all burst into tears. I am still crying, as I am writing this.

5. Your favorite scene from the movie?

The end. It still gets me. I watched the film 50 times and I still lose it. Because you see, there were so much love, and loss, and pain and tears and the Armenians did not lose Faith. “We die today, but with a Cross in our hands and a 100 years from now, we will have grand children and great- grandchildren, that will carry our name”. And they are! The Armenians will Always honor their ancestors.